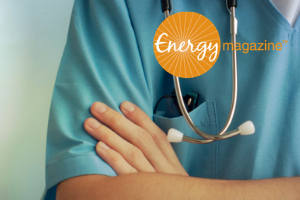 I am the daughter of a nuclear physicist. Even my mother, growing up in farm country, saw science played out on a daily basis. As a result, I grew up in a very science-based household. I was taught to question everything and accept very little at face value. As a registered nurse (RN) who started out as a physics major in college, I am thoroughly steeped in the hard sciences. So in 2010 when my best friend and colleague, Michelle, approached me with the idea of Healing Touch, it was all I could do to not spew my Coke. I genuinely thought she had taken a long walk off a short pier and plunged into complete and total lunacy.

For the next year and a half, she was extremely persistent in her appeal to me regarding the benefits of Healing Touch. Over and over, she showed me how to do it — where to place my hands, how to feel the energy moving and when to move to the various hand positions. We even completed Healing Touch on each other and, I have to say, I found it very relaxing. But, beyond that, she lost me. Frankly, it looked like Voodoo. Waving my hands over someone? It looked every bit as scientific as if I had a magic wand, waved it over a person and chanted, “Abracadabra…abracadabra…” However, not wanting to hurt her feelings, as she is my best friend after all, I tried to be polite and enthusiastic.

In time, I became genuinely concerned about Michelle’s reputation and standing on our hospital’s inpatient oncology unit and I felt that I should set her straight on this Healing Touch business. I mean, people started talking. What is she doing? What is that? Is this for real? You have got to be kidding! As you can imagine, I wanted to protect my friend. So, I made it my mission to gently guide her back to her role in Western medicine as an RN.

One day, I was sent to one of our Intensive Care Units (ICU) to administer a chemotherapy regimen to a young man in his early 20s with a very serious illness, deadly, in fact. When I saw him he was  barely responsive, nearly comatose and working hard to breathe. He had refused intubation. His RN told me that it was because he did not want to be hooked up to a machine to breathe.

I arrived on the ICU around 11:30 and at 12:00, I began my chemotherapy regimen, medicating him first with 650 mg of IV acetaminophen, 50 mg of IV Benedryl, and 125 mg of IV solumedrol. These were necessary to mitigate any adverse reactions he might have to the chemotherapy.

As time went on, his vital signs changed very little.

He was having no adverse reactions to the chemotherapy. Sitting there with him, I have to say, it was somewhat disconcerting to see how hard he was working to breathe. My heart ached for him; he looked miserable.

At 14:45, I was more than two hours into the regimen. As I sat there, monitoring him, I thought this would be a good time to put this Healing Touch to the test. Right in front of me I have a patient who is a prime candidate for it. I was certain that by doing Healing Touch on him I would finally be able to demonstrate to Michelle that this modality is just as silly and nonsensical as it looks. I would be able to tell her that I tried it on a patient and NOTHING happened! Then, maybe she would put all of this to rest and come back to the real world.

The timing was perfect. My patient was not scheduled to receive any more medications for the next few hours. Nothing was going to change for him. The chemotherapy was not having any effect on him or his vital signs. Everything was status quo.

Just then, the patient’s mother arrived. I told her that I would like to try Healing Touch on her son, carefully explaining what I would be doing with my hands. Not wanting her to think I had totally lost my mind and with professionalism exuding from my pores, I explained the benefits of Healing Touch to her. After countless recitations by Michelle, I could not help but memorize them. I even asked her if she would like to assist me, thinking that the energy being moved by two people would have more of an effect than the energy being moved by only one person. After all, if I was going to dismiss Healing Touch as wishful thinking, then I was going to give it the best possible test I could.

To my surprise, she immediately agreed. She was even genuinely enthusiastic. I think seeing her son in his present condition made her welcome anything that might help him. She put down her belongings and made her way to her son’s bedside. After some preliminary grounding techniques, she mirrored my every move, making sure her hand placements were exactly right. Interestingly, I could actually feel moving sensations between my hands. Thinking it was just the power of suggestion, I tried to dismiss it and continue. Surprisingly, those sensations continued. Not only did they not stop — they changed as the session went on.

All of a sudden, about halfway into our session, the patient started shaking to the point where the bed was noisily thumping. I have to say it was rather alarming. His mother looked at me with a somewhat frightened look on her face, and asked, “Is this normal?” Although I was a bit unsettled myself, as I had never expected or experienced such a response from merely touching someone, I decided to act cool, like I knew what I was doing. I told her the body can have many different kinds of reactions to Healing Touch. It is just the energy moving. We will just keep going. I did not understand what was happening. I thought it might be a reaction to the chemotherapy but, if it was, it was very atypical. I was getting ready to medicate him for the shaking, but, within a minute, his shaking calmed and he was still.

Once the session was over, at 15:55, we sat by the bedside and waited for the next set of vital signs. I could not believe what I saw! To my utter astonishment, his vital signs had normalized! I sat there stunned, with my jaw dropped to the floor and my eyes as big as saucers. Was I really seeing this? His temperature was 36.8 C. His blood pressure dropped to 127/82, his heart rate fell to 96 and most surprisingly of all, his respirations slowed to 22. What in the world just happened? How did this happen? How did this work? What did we just do? His mother was as amazed as I was and she was looking for answers, too. All I could tell her was what Michelle had been telling me all along — “You move the energy and things happen.”

Within the next 30 minutes, the respiratory technician came into the room and looked at him closely. Then she looked at her watch. She looked back at him. She looked at her watch again. She was counting his respirations. Then she turned to me and said, “Huh, what happened?” I told her that his mother and I had just completed a Healing Touch session for him. Not knowing what that was she asked me a number of questions. How did it work? How does it affect the body? How did it work on this patient? I gave as detailed an explanation as I could but, frankly, I had the same questions myself. After telling her all that I could, her only reply to this was, “Wow!”

For the first time, Michelle’s words hit home. I saw, first hand, a very real response to Healing Touch. I mean, he was not faking his vital signs! This was a patient who needed to be intubated and now, after Healing Touch, his respiratory rate was near normal. His blood pressure and heart rate were normal and one could see that he physically looked calmer and more relaxed. He was not working nearly so hard to breathe and his body was much more still. He was finally resting.

For the next six hours, I sat in the room completing my chemotherapy regimen, waiting for his vital signs to revert back to what they were but they did not. In fact, the following morning I called the unit to inquire about him. His RN said his vital signs were still normal and he did not, as yet, have to be intubated!

I was completely blown away! What in the world do I tell Michelle? Where was all the lunacy, silliness, nonsense and spewing of Coke now?! I was humbled and my mind was changed about Healing Touch. Something definitely happened…not only to my patient, but to me as well.

Needless to say, I had to learn more about this modality. Because of its dramatic results on my patient, I made it my mission to gain as much information as I could. I took the Healing Touch Level 1 class. I read as much research as I could find and, at that time, there was not much research available. I reviewed the generation of magnetic fields from electric currents. I read about the body’s biofield, heat signatures and ability to carry an electric current. The more I read, the more I needed to find an answer as to why Healing Touch works.

Fast-forward to 2016. There is now a rapidly growing body of research about Healing Touch and other integrative therapies. We are learning more and more about why they work and the science behind them. The deeper I delve into HT and the various integrative therapies, I come away thinking that we might never be able to explain, fully, why they work. We may have to be satisfied with the conclusion that they do. But, just because science cannot explain everything does not mean that something that works is not valid. Just as science is explaining more and more as the years go by, one day, Healing Touch may be completely scientifically explained…or not. Whatever the case, it works.

Unfortunately, my patient’s story does not have a happy ending. I made one final phone call to the ICU to inquire about him. His RN told me that his vital signs remained normal until the evening of the second day at which time his condition deteriorated rapidly. He finally consented to intubation as a lifesaving measure. Sadly, he succumbed to his illness and he died the following morning.

What was amazing to me was that in the midst of the severity of this disease and for at least 24 hours, this patient did not have to be intubated and his vital signs remained stable and normal. He had a time of rest and peace before the end came. As an RN, I was so grateful to be able to give him that!