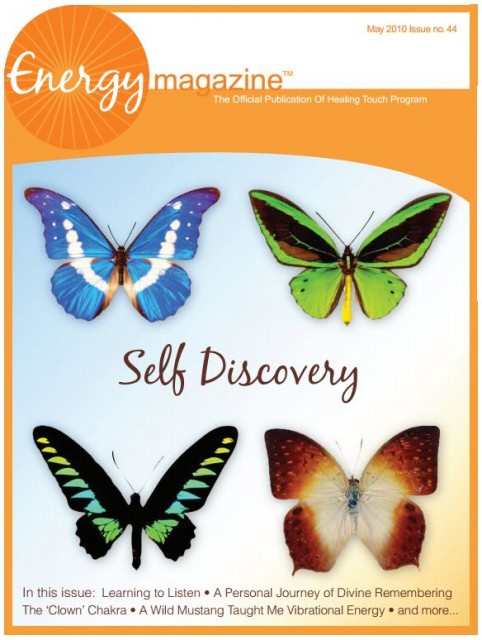 Originally published in Energy Magazine: The official Publication of the Healing Touch Program May Issue.   Learning to Listen by Deborah Schlag, HTP

I like to be creative, combining several things for a fabulous outcome. Get the most “bang for the buck” so to speak. While working on my own healing and spiritual path I created the Bless­ing of the Quilts. To clear my clutter and open space for new growth, I decided to recycle the scraps that were left from my previous sewing business. I had half a brain’s worth of clutter. I mean good fabric waiting to be something won­derful for someone else. When I had my busi­ness, the scraps (some more than six yards long) were eventually used in some way. At that time it was not a scrap pile, it was my personal stash – a collectors dream. Now it was tak­ing up space – not only in my house, but in my life. There was so much time involved in deal­ing with it while packing and unpacking when I moved. (I had already made two moves with it and knew I would be moving again the follow­ing year.) This fabric was also good fabric, too good to just throw out. I had previously offered all of it to several sewing groups in my town – who turned it down. This is absolutely unheard of in sewing circles – turning down fabric- what were they thinking?! Then, it hit me — ta da! Clear my clutter by making it a blessing for someone else. This fabric needed to be made into quilts for The Denver Children’s Hospital.

When I started the project I was just making quilts. Through­out the months of making them the project grew or shall I say evolved. What was interesting was that previously when I sewed, I always listened to the radio. However, from the very begin­ning when I worked on these quilts, it was different. I worked in silence, often spending the day in prayer for the children who would receive them. I came to understand that the fabric was not accepted by the groups to whom I had offered it because this project needed to be done and I was the one to do it.

I started to intuitively receive information about the children who would be receiving the quilts – seeing, hearing, feeling, sensing, and knowing. These children all needed so much love and heal­ing. I 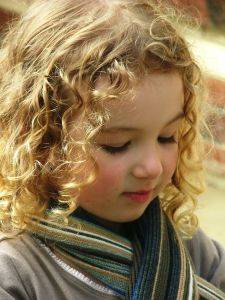 had fabric stacked on my table, chest high, double wide rows, covering the entire length of my 110” table. That was just the start. In the middle of choosing fabrics and piecing together what I thought I was making I would hear “no not that – she or he does not like that color. Get that piece in the pile over there.” I was always surprised because the fabric to which I was led was usually one that I had not seen and about which I had for­gotten. The color combinations became things I would not have put together – some very unusual for me. As I worked, if I tried to go with something other than what I heard, it did not work. It would be either just a few inches short of what was needed or the sewing machine would freeze up. I quickly learned that whatever I heard I might as well do, because anything else would not work no matter what I did. Once I began listening to instructions, the information started flowing. The information was definite – “today we’re making one for a little girl or this one is for a little boy.” I learned about the children — the Navajo baby boy from one of the Dakotas, a little boy from Minnesota, many for preemies, some age two or four. There was a three-four year old little girl whose quilt was quite plain. I kept thinking I needed to change the back so it would just be plain on the front when I “heard” that hers was a brain issue and she could not tolerate looking at too much. There were preemie twins, a boy and a girl. All I knew was that she was struggling more than he was. There was an African Ameri­can girl who likes soft and pink – hers was made with satins and velvets. Every quilt was meant for a specific child, the stories of each unfolded as the quilts came together.

I had the tops of two quilts done in the first days. For some reason, I could not finish them. One was larger – the backing I picked was brown velour, nice and soft. Every time I picked it up, it did not feel right. Finally, when I was almost done I needed some more batting to finish another quilt. I went to look in a box I had not opened yet and found a soft flowery print un­der the batting. I knew instantly that it was the correct fabric for the unfinished quilt. I had thought all along it was for a little boy. It was not – it was for a little Hispanic girl of around four. The other quilt was soft fabrics, pinks, some solid, some with a print – one with X’s & O’s. I loved the quilt and at the same time could not bring myself to finish it. She was very special, small, and very ill. I finally finished the edges in creamy bridal satin – the very best. Everyone who saw the quilts could identify that one without me saying a word.

At the time I was also working towards my certification for Heal­ing Touch. I knew if we could heal from a distance that the pos­sibilities of what could be done were endless. Why not infuse the quilts with love and energy? I decided to ask other healers to help. Fun and fabulous things need to be shared! I thought all of us would gain something unique to us. I also received information that the quilts, once filled with energy, would be self sustaining. They needed to be continually passed on to others because they had a lot of work to do. To do this I could request the help of Angels to prompt the owner of the quilt to pass it on.

When the quilts were completed (32 in all) I took them to a beautiful overlook off the Blue Ridge Parkway above Asheville, NC. There, I met with the other healers who were participating. We prayerfully infused the quilts with love and healing energy. Healing stones were also used. The stones used were Kunzite for accessing Angel energy, Celestite also for Angel energy, Selenite for higher vibration for the purpose of intuition and healing, Sugilite and Infinite known to be healers’ stones, and Moldivite which is strong, powerful, and assists with the trans­formation process. The vibrations of these stones in concert with one another were very high – enhancing and supporting the intentions of the quilts. We prayerfully requested that each quilt would have its own Angel to see that it passed from child to child, guiding it, until it disintegrates. Now that the quilts were blessed, they were ready to be taken to The Children’s Hospital in Denver, Colorado.

My car was packed and the quilts were on the seat behind me as we left South Carolina. I tend to be sensitive to electromag­netic energy in large doses. In big cities, we normally take back roads and bypasses to avoid overload. However, on a trip of this nature, high energy areas were just not possible to avoid. Atlanta is a place where I usually do not venture. As we neared the city I could feel the intensity of the energy, overloading me and I felt ill. My husband suggested that I use one of the quilts to see if it would help me. I thought “I can’t do that,” when I heard “use the quilts!”  I reached behind me and pulled a quilt to the front seat. It was the largest one, interestingly. I did not remember it being on top. I unfolded it over me. Instantly I felt calm, very tired and could not keep my eyes open. The next thing I heard was “it’s okay now, wake up.” I sprung up – surprising my husband and asked where we were. He said that we were about 20 miles out of Atlanta. I could not believe it! It was as if I had been anesthe­tized — instantly out and awakened when finished. When I real­ized what happened I was ecstatic – I had worked on this great project that just kept getting better. I knew then that everything I had wanted and for which I had worked so hard – these quilts were exactly what they needed to be. I felt privileged to experi­ence the healing power of the energy that the other healers and I had infused into them, as well as, the Angelic guid­ance that had been requested.

It also got better! I do not sing. I like to, but it is not my gift as in — REALLY not my gift!  If, you know what I mean? When they were born, I am the mother whose children requested, “Mama please don’t sing!” The whole trip – the whole trip I could not keep quiet, all three days. I sang children’s songs the entire way. I could not stop if I tried. When my husband talked to me I would answer the question and keep singing. At one point he asked “Are you going to do this all the way?” I just shrugged. I sang songs I knew and ones I had never heard before. There were a few with tribal beats, others made me think of Indian songs and folk songs. It was interesting. I decided that each child had his or her song. Songs that their families sang to them or the ones that would be their favorite. I was being included and thanked by this sharing of part of their lives.

Once in Denver the blankets were delivered to The Children’s Hospital. The Director of Volunteer Services graciously accepted the blankets. As I left the hospi­tal, I felt a sadness come over me as if I was leaving behind someone I dearly loved. The tears came. In that moment I knew that my sadness and the loss I was feeling were the Angels that had been with me throughout the whole process. I had been surrounded by them for months, all day every day. Understanding what was happening I blew them a kiss and thanked them for all of it. We parted — I, having finished my les­son on learning to listen — the Angels who accompa­nied the blankets, off on their own journey of healing.

What a blessing! I keep listening and it just keeps get­ting better!!

Deborah started taking Healing Touch while healing from an injury of her own. She recently finished Heal­ing Touch Level 5 in Asheville in December 2009 and is working towards becoming a Healing Touch Certified Practitioner.