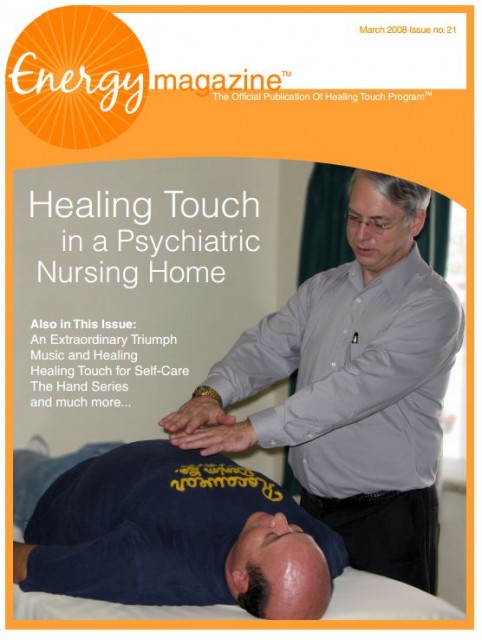 “After silence, which is the most incomprehensible, comes music” – Aldous Huxley.

The meeting of Healing Touch and music brings together two of the most ancient healing arts for the benefit of humanity. Music, according to ancient people, was not a science or an art but the first language where the messages present in nature, like the movement of air, water and fire are expressed in the vibration of sound. Life expresses itself as music. Life is vibration, death is stillness and silence. Music has always existed in the universe. We continually tap into it as our consciousness evolves, translating it to a new musical understanding as we recognize its value. It has shown itself through artists, healers, and visionaries. Music precedes all other formation and intuitive cognition. It comes as an expression directly connected to a human, inner-heart knowing. This heart knowing comes down from the spiritual realm to those who have developed inner hearing and are capable of translating it to audible, earthly sounds – that we know as music.

Ludwig van Beethoven was one of the great musical giants. He said, “Music is a higher revelation than all wisdom and philosophy. Music is the electrical soil in which the spirit lives, thinks and invents.” Einstein’s description of how he received the Theory of Relativity is very similar to that of Beethoven’s musical perception of spirit. “It occurred to me by intuition, and music was the driving force behind that intuition. My discovery was the result of musical perception.”  Two years ago, I attended a workshop presented by Candace Pert, Nobel Prize winner, scientist and author of the book “Molecules of Emotions” a story about discovering molecular structure of emotions. According to her, we are all “symphonies of sound,” and our cells are constantly vibrating and making music of their own. She created her own meditation music CD which helps to release negative emotional blockages.  Music can relax, reduce stress, regulate stress hormones, slow heart rate, lower blood pressure, increase or decrease flow of energy, reduce muscle tension, improve body motion, coordination, and endurance, boost productivity, increase endorphins, improve digestion, control appetite, enhance immune function, change emotional moods, generate a sense of safety and wellbeing, enhance sympathy and compassion, release emotional blocks, relieve panic attacks, reduce shyness, bring peace, increase memory and orientation and stimulate the intellect. 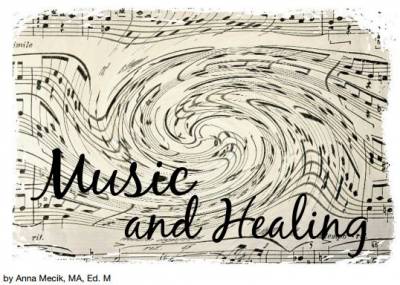 In response to physical trauma, connective tissue becomes hardened and scarred, trapping organic material as well as negative emotions, forming very dense regions at the ends of tendons and ligaments as well as causing cell dehydration. Oliver Sacks, M.D., author of “Awakening,” experienced music’s healing power after a fall while climbing in Norway. He incurred neural damage, partial paralysis and thus forgot how to walk. He listened repeatedly to a recording of a Mendelssohn violin concerto. One morning, awakened by this music, he got up and walked across the room to turn off the tape.  He found that the concerto was only playing in his mind.  He realized that he was walking – carried by the tune.  He calls it the most dynamic experience of his life.

It has been proven that sound produces measurable vibratory feelings throughout the body, depending upon the frequency and amplitude of the sound used. Certain sounds have a healing influence upon the body because they influence the geometric patterns and organization of cells. In 1988 Dr. Richard Gerber wrote a book called “Vibrational Medicine” as a result of over 25 years of research to substantiate the existence of an extended subtle-energy human anatomy.Dr. Gerber talks about his vision of having a kind of “Mayo Clinic of healing,” in which research could be conducted upon the many dimensions of healing phenomena within an academic setting. The center would be staffed by medical personnel from traditional fields of study but also by music therapists, acupuncturists, healers, herbalists, and clairvoyants. The key issue here is scientific validation of all alternative forms of healing.  In the chapter “Astral Body, Seat of Our Emotions and Disembodied Consciousness” he presents a “Piano Keyboard Analogy of Human Frequency Spectrum. Octaves of musical tones could be seen as similar to octaves of electromagnetic energy. The lowest 8 keys on the left side compare to the physical spectrum of frequencies.  The next set of 8 keys to the right forms the energetic field of the etheric realm. Still further to the right lies the next higher octave, comparable to the realm of astral energies and so on.” Music is the perfect vehicle to carry symmetry, beauty and harmony. It has a power of entrainment where two different frequencies of sound can induce spontaneous synchronization into complete union. We reverberate with every sound we hear and each vibration will have a certain effect on us, either stimulating or soothing. The power of sound within nature and physics is vast. Infrasounds below 15 cycles per second are synonymous with destruction, for example.

NASA has found that black holes emit vibrations fifty octaves below middle C. This is perhaps connected to the incredible gravitational pull of these phenomena. What kind of music application would be most beneficial?  Music that helps the client enter an altered state of consciousness for the purpose of self-healing and promoting entrainment between the therapist and patient is highly beneficial to healing. Many believe that nothing compares with toning and harmonics. Perhaps the best way to open a healing session would be to harmonize with the patient through deep breathing and playing a beautiful toning CD with a very gentle background. Toning is singing one tone. It helps to develop diaphragmatic breathing and continued singing on a slow exhale.  We should encourage clients to tone. Their own voice may be a key to their healing. Toning oxygenates the body, teaches deeper breathing, stimulates energy flow, relaxes muscles, slows heart rate, stabilizes all rhythm, and massages and tunes up the body. Try vowel sounds like aah, om, hum, eee. One minute is sufficient. Tuning forks, Tibetan bells, crystal or eastern bowls are best for setting the stage and space. Tuning forks are good for removing tension and headaches by aligning the left and right hemispheres of the brain, clearing space and balancing before and after a session. They may be placed on painful and stressed points of the body while vibrating.

Releasing blocks and negative emotions allows for clearing and opening to a new, higher vibration. We can’t pour anything into a cup that is filled. Music opens the heart and helps to create an emotional release. A composition that is beautiful, radiant, and full of light will affect on a much deeper level.  I guarantee that Morten Lauridsen’s “O Nata Lux” played during your healing session will increase the healing results and take it to a deeper level. The voices here are woven into a gateway of incomparable angelic beauty and will touch everybody. The extraordinary sound of Buddist Gyoto monks who deliberately cultivate the lowest possible tones and “The Lama’s Chant” sung by Lama Gyurme are the most healing, soothing and releasing vocal music. I also recommend “Benedictine Monks of Santo Domingo” singing

Gregorian chant. The ability of music to touch people in a profound way is a testimony to its healing power. The CD “Sound Body Sound Mind” has a subliminal background of Delta brain waves in which spontaneous healing is more likely to occur. I also recommend David Hykes’ CD “Harmonic Meditations.”  Music is also a tremendous carrier of image and intention.

At the Noetic Science conference in 2005 I attended a workshop by Gary Malkin, “Aural Alchemy: The Transformative Power of Spoken Word and Music.” We were working in groups of two, alternatively playing the role of listener and talker. The subject was “why are you here?” We started without music and as one person was expressing the purpose of their lives the other was deeply listening without any comments or distraction, gently repeating the question “why are you here”?  Nobody accomplished anything really spectacular. Then, Gary added music as a background and we witnessed transformation. People became bold, poetic in their expression, deeply moved, radiant about the purpose of their life and why they are here. The experience demonstrated how music carries an incredible amount of inspirational creativity. If only we knew how to eliminate illness by sending the exact vibration to tune every cell back to health without invasive medicine, surgeries, or chemicals. It would be the greatest medical revolution on our planet. We don’t have that knowledge yet but we are in the process.

Sharry Edwards discovered she could hear music coming from people. She created the Bio-Acoustics method whereby she plays the tones that are missing from a person’s energy field. She once treated a hospital patient in critical condition as a result of zinc poisoning.  Within 15 minutes of the treatment he was stabilized. A skeptical physician turned off the tape. The condition of the patient reverted to critical within minutes.

In 2006 I met the most amazing sound healer, Saruah Benson, in Colorado during the Healing Sounds Intensive. I had two sessions with her – both unique and deep experiences of connectedness and love. Saruah told me “put love on everything. When you fear – put love on it. When you feel anxiety and stress put – love on it. Whatever you feel – put love on it.” She believed in the healing power of the human voice. “Voice is a healing instrument carrying our breath which is prana, the energy of life. Voice amplifies chi. Voice has warmth, natural vibrations and moisture. It is our gift and our life.”  She would send sounds into a patient’s body, especially to the abdominal area and would ask the patient to sing. She would send whatever energy blockages that emerged during the healing to the light. After the treatment all chakras were open and all problems with which that patient came were gone.

About the author: Born in Poland, Anna Mecik has always been interested in music, spirituality and healing arts. She studied performing arts and was trained as a concert pianist under Professsor Zbigniew Sliwinski. She received an M.A. from the Academy of Music in Gdansk, Poland. She performed and lectured in Young Audiences Concerts in the Baltic Philharmonic in Gdansk, Poland. She received an international scholarship and was admitted to the doctoral program at Columbia University, N.Y. She graduated with an Ed. M. degree before beginning her teaching career. She established a piano studio at her home in Huntington, N.Y.  Always involved in new endeavors, she was also pursuing her spirituality and an interest in healing.  After moving to Virginia, she began training and became certified in bioenergy with Mietek Wirkus, a famous healer from Poland currently participating in energy studies at Walter Reed Hospital and Samuel Institute. She is a composer and member of CSMC (Montgomery County Composers Association). Her compositions express her deep spiritual connections and are classified as healing music. She teaches piano, theory, composition, healing with music at her Oakton Piano Studio.  She is a Level 3 student of Healing Touch. She has one son, Philip.